Across the globe, there are more than one billion adults who smoke. Looking for safer alternatives, Herbert A. Gilbert created the first e-cigarette in 1963. The first models didn’t include nicotine and were nothing spectacular. However, after many modifications, vaping was born.

In 2010, things shifted, and people saw vaping as a positive way to give up traditional cigarettes and their deadly toxins. Unfortunately, things are not always as they seem. Vaping has become a public health crisis due to numerous people complaining of pulmonary complications from this presumed “safe” alternative. 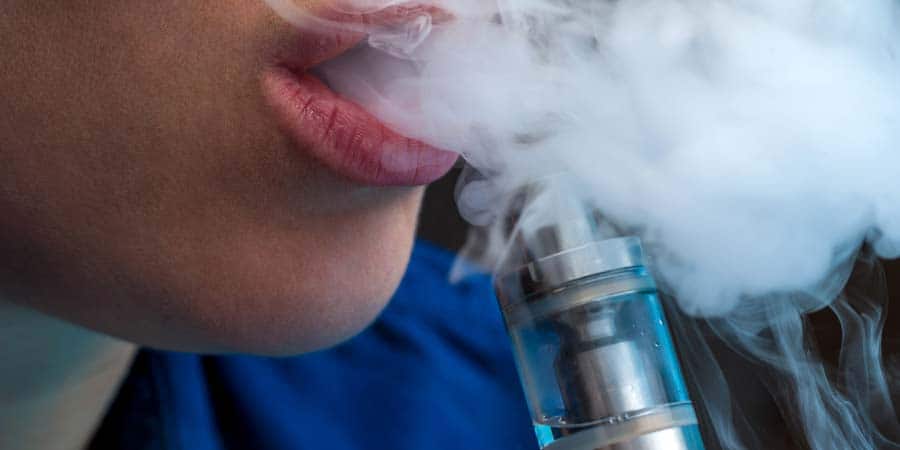 Juul e-cigarettes are one of the most recognized brands on the market. They were developed by two former smokers to give people a better option without the carcinogens. They look similar to other brands, but they have a couple of provisions that make them unique.

First, they are sleek and easy to disguise. They recharge with a USB-drive that is small enough to fit within your hand. Second, unlike other e-cigarettes, they don’t create a massive cloud that makes vaping evident. E-cigarettes are unique because they transform liquid nicotine into a watery vapor for the smoker to breathe. Users state that they are very similar to smoking regular cigarettes, and they like the fact that they are not breathing in all those toxins. However, are these electronic cigarettes safe?

Juul’s e-cigarette first came on the market in 2015, and they brought with them an abnormally high nicotine content that was unlike any other brand. They are disposable, so there is no need to refill the cartridges, which helps to keep the quality high. They’re simple, have no buttons or switches to operate, and they have a built-in feature that keeps the user from getting throat irritation should the cartridge get too low. These e-cigarettes sound like the answer for people who have been trying for years to quit smoking. However, Juul is at the forefront of the investigation into the dangers of vaping. Recently, the hazards and possibility of lung Injuries connected to e-Cigarettes have become apparent. Society is aware of the risks with traditional cigarettes, but vaping is somewhat new. It took time to find out exactly how dangerous these alternatives are to the lungs. Ask any Juul Vaping Injury Lawyer who has clients who rely on inhalers and breathing machines from damages; they are not safe.

Many young people see e-cigarettes as an acceptable way to smoke without any dangerous side effects. However, when several people in the vaping community developed pulmonary issues, it quickly became a public health crisis. The Center for Disease issued a public statement on September 6, 2019, regarding this matter.

They stated that the public needed to cease using any e-cigarette products as there were many warning signs that they cause lung conditions. They further said that they were not sure what was causing the pulmonary issues, and they would investigate further. While the matter is still being reviewed, many JUUL Addiction Lawsuit Lawyers are being inundated with calls from people who are addicted or suffering from significant breathing difficulties.

The CDC has pursued the reports of vaping related occurrences, and so far, there are over 1,000 corroborated cases, and 15 people have perished. Most of the people treated are under 35 years of age, and almost 20 percent are under the age of 18. While the numbers are rather small, as popularity continues to grow, the incidents will likely increase. Individuals experiencing side effects from vaping report:

The size of the outbreak has led many to sneer at the words of warning. However, many people are suffering who haven’t reported their injuries, and these pulmonary issues could continue if vaping increases in popularity

Determining if the Manufacturer is Liable

When vaping was first introduced, there were no regulations. Since e-cigarettes are not considered a food or drug item, and they aren’t a medical device, they fell off the FDA’s radar. The manufacturer must hold some liability in its product, causing lung problems. JUUL addiction lawsuit lawyers are finding that the companies are liable when their goods injure their users. There were no regulations on these products until May of 2016, and they have already made $4.1 billion in sales.

The real problem with Juul is that they made their money by marketing to the younger, hip crowds. They sold thousands of products, even sometimes resorting to internet sales, to get an increase in revenues from the black market. One way they enticed the younger buyer was with flavors. Both fruity and dessert-flavored vapes are all the rage. However, certain e-cigarette flavors have been banned due to a high toxin level by the Food and Drug Administration.

The first grievance with Juul is that their products have an abnormally high nicotine level, which causes addiction issues. The second issue is their unscrupulous marketing that targets people underage and on the black market. Individuals who wanted an intense buzz flocked to this company for their potent offerings, and now these people are paying the price.

The Attorney General for New York, California, and North Carolina have filed a lawsuit against Juul as they believe they are the cause of the vaping epidemic we face. Many of their users are under the age of 18.

A study was conducted of 15-year-old high school students that showed that they could easily walk into a shop and purchase these e-cigarettes without being questioned. Since Juul uses fruity and dessert, it was easy to draw the masses. Juul is formally accused of:

Many users have developed bronchitic obliteration from the chemicals used to flavor the vape juice. Plus, there are other additives in e-cigarettes that can cause extensive damage to the lungs. Some say that this presumably “safe” alternative can cause more issues than traditional cigarettes. If you have been affected, then you need to talk to an attorney. You may be entitled to compensation.

If you or a loved one has been using Juul e-cigarettes and you have experienced pulmonary or addiction issues, then you may have a case. You need to speak with a Juul Vaping injury lawyer at Nicholson Revell in Evans, GA. Our lawyers will fight for your rights and for the protection you deserve.